by Chloe Scroggins
Published on January 2, 2022 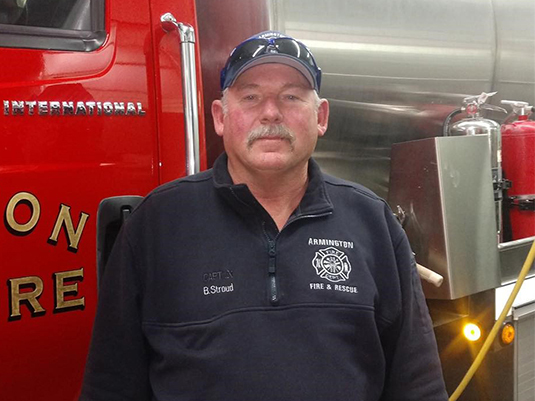 This week we go to Armington for our “Meet the Chief” series. Bob Stroud has been Armington’s Fire Chief since January 2021. When asked about what the best part of being the chief is, Stroud proclaimed, “The best part is being a part of a good group of people who are there to help out when others need it.” Armington’s Community Fire and Rescue Protection District was founded in 1948. The firefighters are all volunteer workers. Their district services parts of Logan and Tazewell counties.

Stroud became a volunteer firefighter because he believed it was something he could do to benefit the community. His dad was also a volunteer fireman and EMT for Armington Fire and Rescue, which influenced Stroud’s decision. He joined the Armington department in February 1989, which means his career as a volunteer firefighter has been 32 years long so far. When Stroud is not fighting fires, you can find him farming or golfing. Farming is his full-time job and he golfs in his spare time.

The Armington Community Fire and Rescue is a small town, or rural area, fire department. Armington’s full volunteer staff is reflective of the other fire departments in our area. All are made up of volunteer firefighters and EMTs. Stroud explained that urban, or larger city, departments will have full-time paid firemen. “Smaller towns and rural areas means less calls, which is a good thing,” stated Stroud. He also described the most rewarding roles of working in a small community. “Serving people is the most rewarding, most of them I’ve known for years. It’s also rewarding to see the little kids smile when they see a firetruck.”

Bob Stroud’s volunteer commitment to keeping our community safe for the past 32 years is remarkable. The Armington Fire Department works hard to keep the community informed on potential dangers and is always ready when needed. The fire department’s Facebook, “Armington Fire & Rescue Department”, posts updates about the dangers and what their team has accomplished in the community!