by Erin Dederich
Published on November 28, 2021 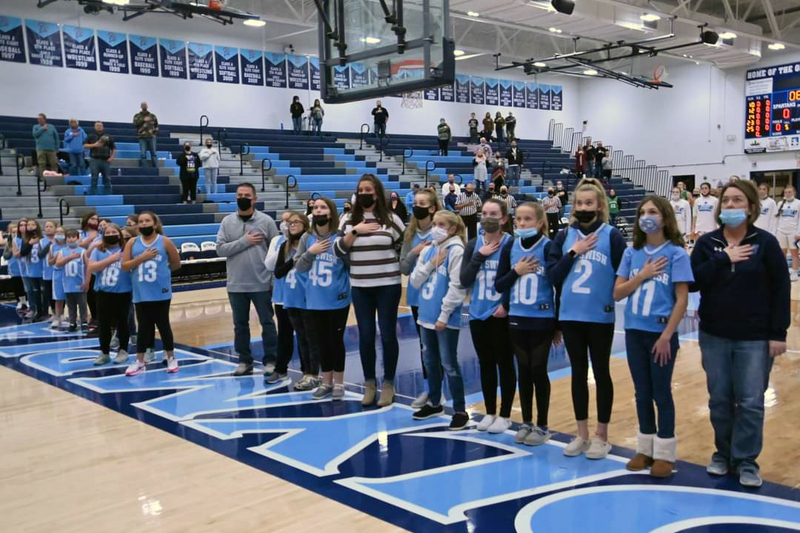 The Oly Swish teams lined up for the National Anthem before the Varsity girls’ basketball game. (Darrel Dubree)

To finish up the Turkey Tussle tournament, the Varsity girls’ basketball team played against Riverton on Thursday. This game was a close battle the whole night, with the Spartans pulling ahead with the win by just one point. The Olympia Spartans then advanced to the third-place game at Clinton High School on Saturday. From the other bracket, Olympia matched up against Clinton. After a long game, Clinton pulled away with the win by just a few points.

Monday and Tuesday night, the girls’ teams had more games. These were the first two games for the JV team, gaining a win in both. Monday night was an away game at El-Paso Gridley. Olympia dominated the whole game, thus winning by 20 points. Tuesday was the home opener game against Athens. It was also Oly Swish night where all of the younger levels of Olympia girls’ basketball came out to the high school game. These kids got to watch the older girls play basketball as role models and then were recognized at halftime of the Varsity game. The Varsity team won again with a final score of 53-31. Right now, the Varsity girls’ basketball team has a record of 4-2.

Then on Wednesday morning, all the high school girls’ basketball players participated in a fundraiser. This was a free throw shoot-a-thon where each player shot 100 free throws. Sponsors could donate per free throw made or just make a flat donation. During this event, the girls shot their free throws, listened to music, ate donuts, milk, and juice, and just had a good time. All money raised goes to support the Olympia Spartans girls’ basketball team with tournament entries, meals, travel gear, uniforms, etc. There is still time to donate to the program, so if you would like to make a contribution, just contact any high school girl basketball player.

Also on Wednesday, the boys competed in a Thanksgiving basketball tournament hosted at El-Paso Gridley. This included the Varsity and JV teams having their first games of the season. The cheerleaders also traveled to the games to support the Spartans. Wednesday's games were against El-Paso. The Varsity team ended up with a loss against a state-ranked team. On Friday, the boys’ played against Roanoke Bensen and won 57-50. Saturday ended the round-robin tournament with Olympia playing East Peoria.

All day Saturday, the wrestling team had their first matches. JV was at the Normal Community JV invite and Varsity went to the Illini Bluffs tournament.